The engagement of Mary of Teck to George, Duke of York, was announced in May 1893 after the couple had become close while mourning the death of George’s brother, Albert Victor, Duke of Clarence. A favourite of Queen Victoria, May had been set to marry Albert Victor on 27 February 1892, however he contracted influenza and died on 14 January 1892.

Saddened by Albert Victor’s death, George and May supported each other through their grief and Queen Victoria urged her grandson to consider making May his wife. George, aware of his duty to the succession, had already proposed to his cousin, Marie of Edinburgh, the year before, however his proposal had been rejected. Wary of being refused again, George was reluctant to propose to May, however with further urging from his family, he plucked up the courage and was duly accepted.

The wedding took place on 6 July 1893 at the Chapel Royal at St. James’s Palace and was performed by the Archbishop of Canterbury with the help of the Bishop of London, the Bishop of Rochester, and five others.

The day was an unusually hot one but it didn’t dampen the enthusiasm of the large crowd of well-wishers who lined the processional route hoping for a glimpse of the couple. The streets were decorated with garlands of flowers, while more were strewn over the bride as she passed by. The first carriages, containing royal guests, departed from Buckingham Palace at noon, and this was closely followed by the Bridegroom’s procession with the Duke of York being supported by his father, the Prince of Wales, and his uncle, the Duke of Edinburgh. The Queen’s procession then followed with included May’s mother, her brothers and with the Queen’s entourage in the rear. The Bride’s procession was last with May being accompanied by her father and bridesmaids.

The reception was held in the State Dining Room and the Ballroom at Buckingham Palace which was attended by 300 guests, with the young couple sitting on either side of the Queen who retired to her own rooms after the luncheon was served. Later in the afternoon, the newlyweds appeared on the balcony alongside the Queen and the rest of the royal family.

The main wedding cake, made by Messrs Bolland of Chester, was decorated with symbols from George’s naval career with panels showing the HMS Thrush and the HMS Melampus on the first tier. The second tier bore the shields and coronets of the couple with their monograms decorated with bouquets of white roses and May blossoms. The third tier had four dolphins and figured with harps surrounded by national flowers. The top featured a nautilus shell supported by cupids resting on seashells, arranged with a bouquet of flowers with satin streamers.

After the reception, the newlyweds left for Sandringham where they would spend their honeymoon at York Cottage.

Before the wedding, it was announced May’s gown would be made with materials entirely sourced in Britain and would be designed by Arthur Silk, of Silk Studios. Silk had already made a wedding gown for May’s wedding to Albert Victor, and the Lily of the Valley creation had been made public just days before the Duke of Clarence’s untimely death in January 1892.

May’s second gown was ivory silk satin, embroidered with roses, shamrocks and thistles in silver thread, and trimmed with garlands of orange blossoms. The front of the dress had three small flounces of old Honiton lace which had been used on the wedding dress of May’s mother. The bodice was long and pointed, and was made of white and silver brocade. It also featured a small amount of her mother’s Honiton lace near the top and on the upper part of the sleeve. Orange blossoms were also placed on the bodice and in the hair to match those on the dress. The train had a design of roses, shamrocks and thistles in silver on a white ground.

The lace veil, also originally belonging to the bride’s mother, was held in place with by a diamond tiara gifted by Queen Victoria which would later be dismantled. The diamonds were then used to create Queen Mary’s Fringe Tiara which would be worn by her granddaughter, Elizabeth, at her own wedding. May’s diamond rivière necklace was a gift from the Prince and Princess of Wales, while the diamond earrings and brooch were a wedding gift from Prince George.

The bouquet was made entirely of white flowers, including roses, orchids, lilies of the valley, carnations, orange blossoms and the traditional sprigs of myrtle.

May was attended by ten bridesmaids who were all cousins of Prince George’s and therefore granddaughters of Queen Victoria. The bridesmaids wore simple white satin dresses with corsages and corselets of silver guipure lace with rosebuds in pink.

George and Mary went on to have six children and lived in York Cottage for much of their married life until George ascended the throne on 6 May 1910. Since both were extremely shy, they were never very demonstrative to each other, however they remained devoted to each other and often wrote heartfelt letters to each other. The stress of the First World War and his heavy smoking caused George’s health to decline and he died on 20 January 1936. Mary would outlive him almost twenty years and would continue to play an important role in the royal family, guiding them through the abdication crisis and nurturing her granddaughter, Elizabeth, who ascended the throne on 6 February 1952. Sadly, Mary would not live to see the coronation ceremony as she died on 24 March 1953.

Background Victoria and Albert were first cousins and their mutual uncle, Leopold I of the Belgians, had been promoting the… 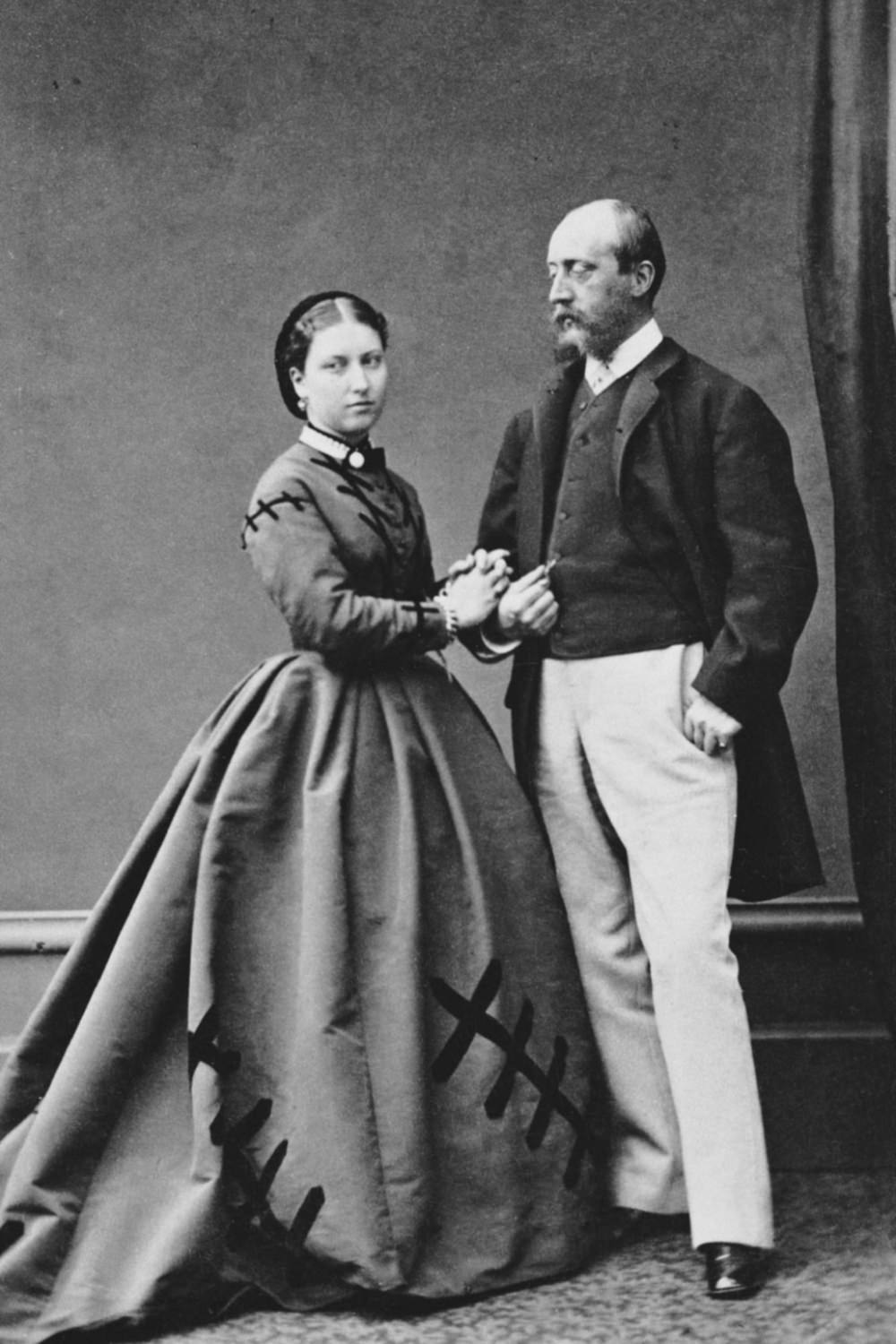 Background A match between Victoria, Princess Royal and Frederick William of Prussia had been in the thoughts of Queen Victoria…

Background Prince Arthur was Queen Victoria’s favourite son and he pursued a career in the military at a young age….

Background Now that their eldest daughter, Vicky, was safely married, Queen Victoria and Prince Albert turned their attention to the…

The Background Leopold, the youngest son of Queen Victoria and Prince Albert, was born with haemophilia so his mother believed…

This website uses cookies to improve your experience while you navigate through the website. Out of these, the cookies that are categorized as necessary are stored on your browser as they are essential for the working of basic functionalities of the website. We also use third-party cookies that help us analyze and understand how you use this website. These cookies will be stored in your browser only with your consent. You also have the option to opt-out of these cookies. But opting out of some of these cookies may affect your browsing experience.
Necessary Always Enabled
Necessary cookies are absolutely essential for the website to function properly. This category only includes cookies that ensures basic functionalities and security features of the website. These cookies do not store any personal information.
Non-necessary
Any cookies that may not be particularly necessary for the website to function and is used specifically to collect user personal data via analytics, ads, other embedded contents are termed as non-necessary cookies. It is mandatory to procure user consent prior to running these cookies on your website.
SAVE & ACCEPT